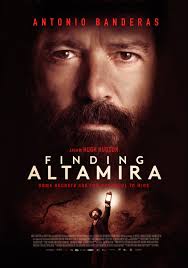 Shown to raise funds for St Mary’s Church, West Knoyle, Altamira is a film about the discovery, by a young girl, of prehistoric cave paintings in 1879 Spain.   Her father an amateur archaeologist was ridiculed by the Church and establishment. Only after his death were they authenticated.

The film is based in Spain with wonderful footage of bison filmed at Bush Farm Bison Centre. It stars Antonio Banderas and produced by Barbara Broccoli of The Bond Films. Music by Mark Knopfler and Evelyn Glennie.